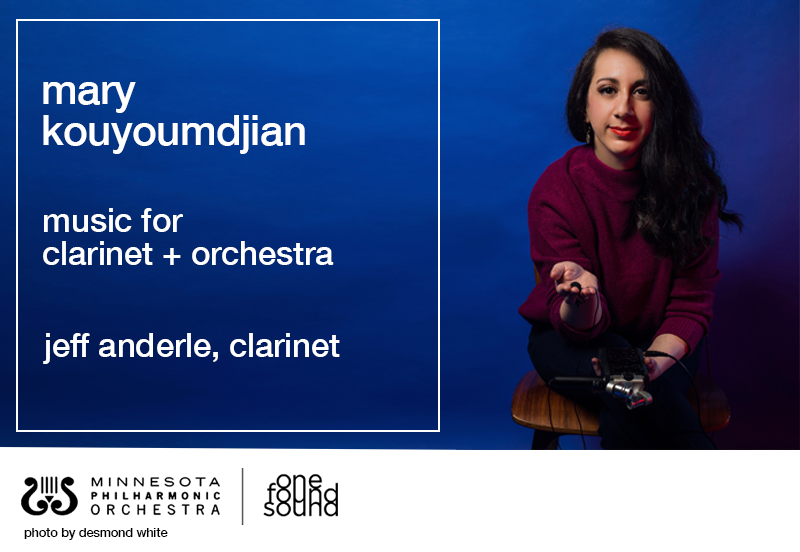 The Minnesota Philharmonic Orchestra and One Found Sound partner to co-commission a concerto for clarinet and orchestra by Mary Kouyoumdjian, premiering in the spring of 2022 by clarinetist Jeff Anderle

Mary Kouyoumdjian is a composer and documentarian with projects ranging from concert works to multimedia collaborations and film scores. As a first generation Armenian-American and having come from a family directly affected by the Lebanese Civil War and Armenian Genocide, she uses a sonic palette that draws on her heritage, interest in music as documentary, and background in experimental composition to progressively blend the old with the new. She has received commissions from such organizations as the Kronos Quartet, New York Philharmonic, Carnegie Hall, the Metropolitan Museum of Art, Alarm Will Sound, Roomful of Teeth, OPERA America, Beth Morrison Projects, and Bang on a Can. Kouyoumdjian is a cofounder of the annual new music conference New Music Gathering and is on faculty at Brooklyn College and at The New School. Mary writes:

“I am beyond thrilled to create a new work with the extraordinary musicians of One Found Sound and Minnesota Philharmonic Orchestra, and to collaborate closely with dearest friend and clarinet wizard, Jeffrey Anderle, on this concerto. While I have worked actively as both a composer and as an orchestrator, this is my first commission to create an orchestral work of my own original music, and for this I am incredibly excited to be inspired by and to write for this dream team of imaginative musicians and wonderful human beings.”

Jeff Anderle is a pioneer in the world of low reeds, helping to popularize the role of the modern clarinet and bass clarinet through his innovative and diverse performances, ensembles, and commissions. He is the bass clarinetist in Splinter Reeds and half of the bass clarinet duo Sqwonk, as well as a member of the San Francisco Contemporary Music Players. He is a former member of the virtuosic, heavy metal bass clarinet quartet Edmund Welles, as well as REDSHIFT contemporary music ensemble and the Paul Dresher Electro/Acoustic Band. Jeff is a founding co-director of Switchboard Music, and serves on the faculty of the San Francisco Conservatory of Music where he is the chair of the woodwind department. About this commission Jeff says:

“I have been a friend, collaborator, and admirer of Mary for over a decade, and when I imagined commissioning a new concerto, she was the first person I thought of. I find her music deeply moving and I’m excited to see what she dreams up for clarinet. We’ve been dreaming about this project for a long time, and I’m thrilled to see it come to life with these two incredible orchestras.”

The Minnesota Philharmonic Orchestra and One Found Sound will both give premieres of Kouyoumdjian’s clarinet concerto with clarinetist Jeff Anderle in the spring of 2022.

About the Minnesota Philharmonic Orchestra

The Minnesota Philharmonic Orchestra (MPO) is the first GLBTQ+ orchestra in the United States. The MPO was founded in 1993 by Kevin Ford, a gay man who had a vision of a GLBTQ+ orchestra that would build community and fellowship through the performance of classical music. As a GLBTQA+ orchestra, we share a commitment to inclusivity, amplifying the voices of composers and performers from underrepresented and marginalized populations, and building stronger, more equitable communities through courageous, beautiful music-making.

About One Found Sound

One Found Sound (OFS) is a democratic, collaborative orchestra at the forefront of equitable and barrier-free music. OFS brings creative events to unique and informal spaces where audiences and artists connect through a mutual sense of discovery and expression. One Found Sound is proud to champion music that reflects the diversity of its community, and is dedicated to supporting the creation of new music by diverse peoples. Operating without a conductor or single artistic director, the group’s creative vision is placed entirely in the hands of its artists. One Found Sound embodies the heart of their artistic mission: coalescing the creative energy of young artists and the vitality of their audiences to create an extraordinary musical experience.