Shimmering colors and unforgettable melodies flow from three works that challenged contemporary notions of the “traditional” and the “new.” Playfulness and groove drive Libby Larsen’s Overture for the End of a Century, juxtaposing the traditional sounds of 20th century orchestral music with orchestral invocations of mixing boards, computer screens and synthesizers.

The pastorale sounds of Dvořák’s Symphony No. 9, “From the New World” interweave with melodies inspired by Native American music and the rhythmic idioms of from Czech music. Finally our incomparable guest artists, Korey Konkol and Stephanie Arado, captivate us with melodic virtuosity in Bruch’s Double Concerto in E Minor.

Libby Larsen: Overture for the End of a Century
Max Bruch: Double Concerto in E Minor, Op. 88, with Stephanie Arado, violin and Korey Konkol, viola
Antonin Dvořák: Symphony No. 9 in E Minor, “From the New World” 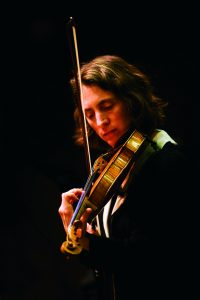 Violinist Stephanie Arado’s career encompasses a wide range of performance and teaching experience. Ms. Arado began her violin studies at the age of five and played her first solo recital when she was eight. Since her debut with the Chicago Symphony as a 12 year old, Ms. Arado has performed as soloist with symphony orchestras throughout the United States, including the
Detroit, St. Louis, and Minnesota Orchestras. Ms. Arado spent 22 years as Assistant Concertmaster of the Minnesota Orchestra and also served as Concertmaster of the Colorado Symphony. In 2012, Ms. Arado resigned from her position with the Minnesota Orchestra to devote more time to teaching and chamber music. Ms Arado has participated in chamber music festivals both nationally and internationally and has had the privilege to perform with such masters as Paul Tortelier, Joseph Silverstein, and Yuri Bashmet. A recipient of a McKnight Foundation Grant for Performing Artists, Ms. Arado maintains a private teaching studio in Minneapolis and is an Artistic Director of the Bakken Trio, a chamber music consortium she has performed with since 1991. 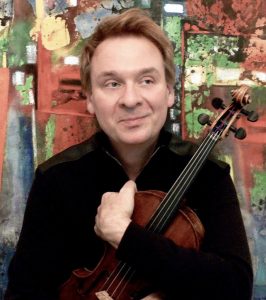 Hailed by Fanfare magazine for his “richly textured tone” and an ability to “weave a magic spell”, violist Korey Konkol has concertized throughout the United States, Europe, Latin and South America with extensive solo, chamber and orchestral appearances to his credit. Professor of Viola at the University of Minnesota since 1992, Mr. Konkol has garnered numerous accolades throughout an illustrious teaching and performing career. Presented with the 2018-19 College of Liberal Arts Arthur “Red” Motley Exemplary Teaching Award as an inspiring teacher of graduate and undergraduate students, Korey’s pedagogy was also celebrated through the Minnesota Strings & Orchestra Teachers Association (MNSOTA) Master Teacher Studio Award in 2013. As violist of the Twin Cities-based Ensemble Capriccio, one of only a handful of professional string trios in the world, he was awarded the first annual McKnight Foundation Fellowship for Performing Artists in 1997. Korey has frequently performed with the Minnesota Orchestra, Saint Paul Chamber Orchestra, and the Bakken Trio having also served as principal violist with the Ann Arbor, Peoria, and Knox-Galesburg Symphony Orchestras. Many compositions have been written for and recorded by Mr. Konkol, including works by Stanislaw Skrowaczewski, Stephen Paulus, João Guilherme Ripper, Randall Davidson, Judith Zaimont and John Tartaglia.